Scarlett Johansson has stirred up quite a fuss recently about her casting in the 2017 live-action adaptation of the Japanese manga “Ghost in the Shell”. When Paramount Pictures and Dreamworks Productions announced the cast earlier in April, they sparked criticism and outcry online over their decision to cast a white actress for the role of Major Mokoto Kusanagi.

It’s not a total surprise that studios wanted to cast Johansson as the lead in an action film. With Johansson’s performances as the Black Widow in the Marvel Cinematic Universe and as the eponymous character in Lucy, she’s proven that she can hold her own in the genre and that her name has currency with audiences.

Despite this, accusations of “whitewashing” (the casting of white actors in non-white roles) have been abounding since her casting.

The outrage is understandable and accurate to an extent, since whitewashing is often committed in order to make films more “marketable” by injecting white actors or actresses into roles meant for people of color.

Comic book writer Jon Tsuei released a particularly resonant thread protesting the casting decision. He argued that the imposed Westernization of the film eliminated the Japanese essence of the story. 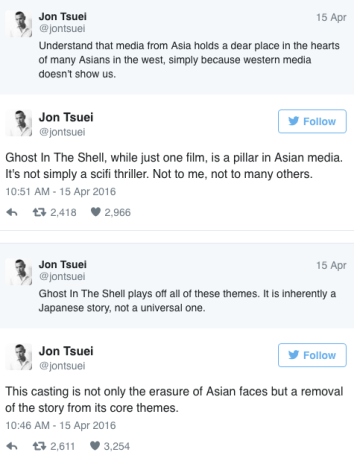 While it may be a comforting thought to some that more people seem to be “woke”, or aware of racism or other social injustices, it is also necessary to recognize that much of the protesting against the casting move is being done in West.

On the flipside, the Japanese online community doesn’t seem too surprised with the casting. Reading Japanese bulletin boards reveal that they might have already accepted Hollywood’s whitewashing as a fact of life.

Translations of the comments in the forums reveal statements like “20 years earlier, this would have been Milla Jovovich”, “Yep, this is a Hollywood film”, and “I thought it was okay they didn’t use a Japanese person” largely outnumbering the number of commenters complaining about the casting. (The author’s favorite is the one that suggests that “Taylor Swift would have been better”.)

Whitewashing has been undeniably present throughout film history through film adaptations or with plain racist intentions. For example, in D.W. Griffith’s extremely racist Birth of a Nation (1915), white actors play African-American characters with the help of blackface. This only served to further the derogatory message that it was preaching about the black community. Charlton Heston was also cast as not just one, but multiple characters of color, from Moses in The Ten Commandments (1956) to Mike Vargas in Touch of Evil (1948) to the titular character in El Cid (1961). In the same year as El Cid, Mickey Rooney also portrayed the ultra-stereotypical Mr. Yunioshi in Breakfast at Tiffany’s.

For a more recent example, take M. Night Shyamalan’s live-action adaptation of The Last Airbender (2010). An indefensible catastrophe on its own, its failure is only exacerbated by its casting of lighter-skinned characters instead of the Asian characters that the original animation had. Even more recently Aloha (2015) received similar backlash over casting Emma Watson to play a character who is originally one-quarter Chinese and one-quarter Hawaiian.

The context in which earlier films were produced do allow us to understand what warranted the whitewashing, but given that we are supposedly living in a more progressive idea that is not making the mistakes of the past, whitewashing should and must be avoided whenever possible. It’s saddening that those so often affected have already accepted it, but that doesn’t mean that we can’t become more aware of this occurrence and more active in the the fight for its prevention.

One comment simply says “Putting race on a cyborg…” Given the complexity of a story like Ghost in the Shell and how it discusses its themes of identity and humanity in a world where “virtual” and “real” are nearly indistinguishable, how important is the discussion of the character’s race? Perhaps, for this story in particular, the message of the narrative now extends past Japan, as technology evolves at dizzying speeds and becomes increasingly ubiquitous. Maybe the world of Ghost in the Shell isn’t as far as we think it is.